ON THE ROAD If you are going to Cracow recently you should follow the shortest way via Chyzne to cross the Polish border. If you want to find yourself go tn Cracow, contemplate the sttnny sqttares, the curvcs of the towers, the rows of old houses – there you can believe that you will meet yuur dreams behind every gate.

Crossing the waves of the Vislula you start your walk in front of the Wawel on thc left winding among forests and fields at the old Barnabite monastery with its three towers waving invitingly from the hills above the old chcstnut-grove. This is the only Hungarian order established by Blessed Buscbius, who gathered together the devont ihermirs of the tonsure. The white hooded Barnabites pray in place of us, the possessed, who love to atnass our phoney trcasures.

Louis, the Ureat often sailed over thc Danube from Visegrád to Márianosztra to one of the most beautiful monasteries to meet the meek monks and discuss the issues of his reign and not hiding the signs of growing leprosy. The great king spent his last years in the chapel next to the church contemplating the fate of his country. Hedwig, the youngest daughter ok Louis, who later became Polish queen and is still respected, liked spending her time among the flowers and books.

Following the loops of the noble Vistula, the Ryneken, the proud tower of the Mary church, is easily visible from the distance surrounded bv the ancient trces of the old royal hunting eslates and you can hear the sound of trumpets blowing The passing of time towards the four corners of the world.

Only the arrows of the Tatars break that sound: the “heajnal” originating from Hungarian word for dawn “hajnal”, i.e. the horn sound signalling dawn. The tower that adorns one of the most beautiful churches of our cultural heritage houses the wonderful triptych of Wit Stwosz carved from Time. Pál Lõcsei, Ihe student of the great artist, who decorated several solitary churches of Upper Hungary also worked in Cracow. Stwosz had another Hungarian assistant, whom he trusted so much that he had him collect the dues from the town council.

A signiticant point and place of pilgrimage of the Jewish-Christian cultural heritage is the Jewish quarter, which has been a “town in the town” from the 1400’s. Centuries have ripened the Yiddish spirit that further enriched arts and sciences saved as ancient heritage. It is good to sit for a while at the plac Bawo, have a coffee and a milk bread in the open terrace of the Ariel and take a walk in Józefa street to the old cemetery; where the wise rabbis of the world of Kazimierz rest. 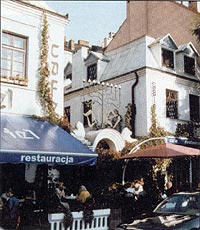 You can only see the faithful copies of Hedwig’s jewels; because the original ones were used to purchase the land where the ornamented, Gothic complex of the Iagello university was built modelled on the universities of Padua and Bologna. Rumour has it that Twardowski, the ageless alchemist of the Middle Ages worked here in his laboratory, entered into collusion with the devil, made gold and left his dark palm print on the wall before Satan took him. It is said that he descends from the silvery Moon on cobwebs in dark nights to see into the secrets of the city.

According to the records of the university many students heve studied in these huge, thick walled halls where the Alma Mater further deepened the truth that “Hungarians and Poles are two faithful friends”.

Rynek is one of the largest renaissance squares in Europe with the buzzing building of the Cloth Hall. The masks to ward off evil spirits, the niches to put out the buming torches at the approach of the break of the day at the main gate, where we see muticoloured flowers, various roses, narcissi, tulips, violets and forget-me-nots tied into bouquets by busy. hard hands at dawn. The town scales were here, expensive cloths, salt, fish, game and honey tasy fruits were sold here.

Each house around the square preserves thc good memories of old Times. An adherent of István Báthori opened The Hungarian wine cellar in The Lamb-head house in the 16th century. 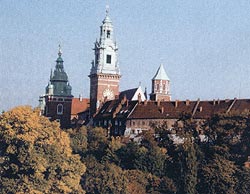 You often meet all kinds of beautifullv carved symbols on the gates. Besides telling a lot about The former dweller of The houses, they also help orientation. The Gold-head houses the chemists of Cracow, while the Salamander house was the place of students’ evenings in the 15th century. Nicholas I, Russian tsar also staved in the Deer house. The pictures of the Polish king Casimir, The Great and his sister, the Hungarian queen Elizabeth – wife of Charles Robert – are found on the keystones of the inner Gothic halk of the Hetman house. Louis, the Great Hungarian, Casimir, the Great Polish, Charles IV Bohemian, Peter Cypriot and Waldemar Danish kings negotiated over their political ideas on the future of Europe in the Wierzyneh house. You can also have a quiet think on our destiny over a coffee and a glass of gond Polish beer in the café in front of the house. 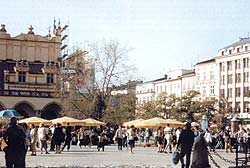 Florianska, the kings’ street opens from the main square. You can see the dark red-bricked barbican, the outer rustic bulwark through the gate in the city wall, where there are now the pictures of contemporary artists. A picture of Mary hangs on the inside of the thick wall of the passage.

Not far from the former Stwosz workshop, walking towards the stone wall of the Jesuit Saint Peter and Paul churches decorated with Baroque statues we are approaching the favourite residence of John Paul II in Cracow. You can see the strong marble walls of the Wawel. The marble was mined in the Carpathians, similarly to those of Buda Castle. The “chipped sword”, the coronation broadsword of the Polish kings is held here. Queen Blessed Hedwig rests under the golden dome of the cathedral. The old bell of the church, which is the biggest one in Poland, was cast in 1520 from captured canons.

As if you woke up from a beautiful dream the end of which you have forgotten is how your feel when you cross over into the Szepesseg via Zakopane among the dark and high peaks from Poland. A melody you hear on your walk; it rouses you then it slowly fades away a song you will never hear again. 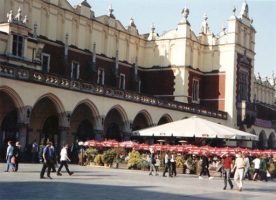 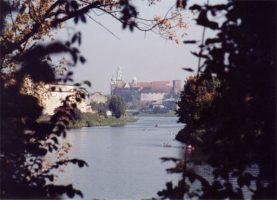